The Pomegranate (Punica granatum) is a fruit-bearing deciduous shrub or small tree growing to 5–8 m tall. The pomegranate is native from Azerbaijan to the Himalayas in northern India and has been cultivated and naturalized over the whole Mediterranean region and the Caucasus since ancient times. It is widely cultivated throughout Azerbaijan, Iran, India, the drier parts of southeast Asia, Malaya, the East Indies, and tropical Africa. I 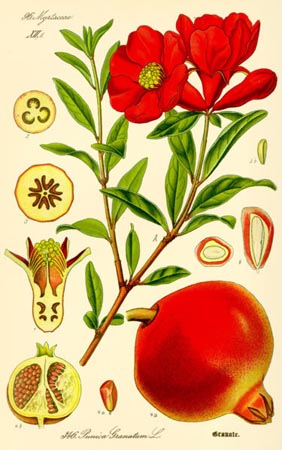 ntroduced into Latin America and California by Spanish settlers in 1769, pomegranate is now cultivated mainly in the drier parts of California and Arizona for its fruits exploited commercially as juice products gaining in popularity since 2001.

The leaves are opposite or sub-opposite, glossy, narrow oblong, entire, 3–7 cm long and 2 cm broad. The flowers are bright red, 3 cm in diameter, with four to five petals (often more on cultivated plants). The fruit is between a lemon and a grapefruit in size, 5–12 cm in diameter with a rounded hexagonal shape, and has thick reddish skin and around 600 seeds. The seeds and surrounding pulp, ranging in colour from white to deep red, called arils, are edible; indeed, the fruit of the pomegranate is a berry. There are some cultivars which have been introduced that have a range of pulp colours such as purple.

The only other species in the genus Punica, Socotra Pomegranate (Punica protopunica), is endemic to the island of Socotra. It differs in having pink (not red) flowers and smaller, less sweet fruit. Pomegranates are drought tolerant, and can be grown in dry areas with either a Mediterranean winter rainfall climate or in summer rainfall climates. In wetter areas, they are prone to root decay from fungal diseases. They are tolerant of moderate frost, down to about −10°C (14°F).

The powdered rind (skin) have been used as a tannin mordant as well as a dye for peachy yellow with alum mordant, old gold with copper mordant, gray to moss green with iron mordant, yellow with tin mordant. Pomegranate rind was also used as a colorant for medieval illuminations. Light-fast and wash-fast.

The rinds are a waste product of the pulverized seeds.  The age of the fruit affects the color of the dye: the less ripe the fruit, the greener the yellow.

The name "pomegranate" derives from Latin pomum ("apple") and granatus ("seeded"). This has influenced the common name for pomegranate in many languages (e.g. German Granatapfel, seeded apple). The genus name Punica is named for the Phoenicians, who were active in broadening its cultivation, partly for religious reasons; consequently in classical Latin the fruit's name was malum punicum or malum granatum, where "malum" was broadly applied to many apple-like fruits. From the latter derived its Italian name melograno and the less used form of that melagrana. A separate, widespread root for "pomegranate" is the Egyptian and Semitic rmn. Attested in Ancient Egyptian, in Hebrew rimmôn, and in Arabic rummân, this root was brought by Arabic to a number of languages, including Portuguese (romã), and Kabyle rrumman and Maltese "rumen".

Pomegranate motives used in antique Azerbaijan rugs last 2 photos symbolize pomegranate flowers, while the first one depicts a pomegranate fruit with its seeds inside.